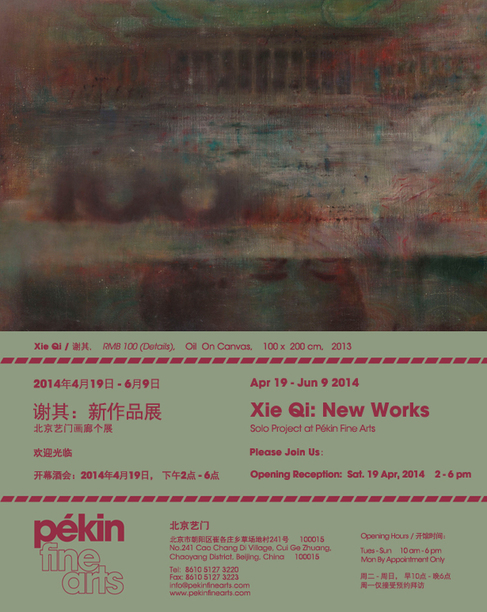 Xie Qi graduated from the Central Academy of Art and Design. She is a full time artist, living and working in Beijing. In this series of oil paintings on canvas the artist implicitly reworks the notion of  “money” in China, by amplifying and embellishing details gleaned from Chinese Renminbi notes. The physical specificity of her subject painting recasts the currency notes with an aura of allure and mysterious aesthetic appeal. Multi-colored and richly layered, via her adept brushwork, Xie’s newly “minted” money-subject paintings are now quite literally endowed with even greater power to seduce.

Chen Xiaomu of Peking University writes, “Tinted and superimposed, images in the paintings are both familiar and strange. Landscapes and figures on banknotes appear only indistinctly. With vague stains and rusts marks like bruises on cool-colored skin. Grids and lines crisscross the canvas like capillaries enabling  respiration and circulation.”

“By making her own rules and renaming the objects, Xie Qi attempts to break out of existing rules of signification.”

“The system of signification forces everyone into its stereotypes, into unified cognition and imagination, while individualized and specialized sensitivity wither away. Xie Qi attempts to remove established meanings, and return symbols to their original freedom of signification. No disassembling, no tearing apart, only fragments of the secular world frozen calmly - this is her language. Her subjects are confusing and defocused when seen from afar, then distinct and delicate, when viewed at close range. And occasionally, you find within her work, a subtle touch of sardonic humour. Under hypothetical rules of the painting game, there exists only pure depiction. However, at this very moment – from the beginning and all the way through to the end – what we see defies depiction; we are consumed by the viewpoint of Xie Qi.”

“I can only conclude: These paintings are the eyes of Xie Qi, looking straight out at  us.”